"Jane, you never point a gun at anybody, ever!"

Part Two of my observations of guns and gun culture in odd places in American cinema. 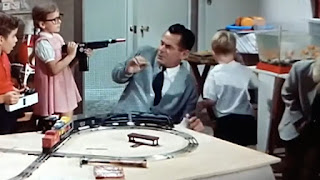 "The Courtship of Eddie's Father" is a 1963 film about a widower and his young son in New York City.  The widower, played by Glenn Ford, falls for a socialite who ends up being a bit selfish.  Perhaps the woman who he should marry is his deceased wife's best friend, who lives across the hall, is played by Shirley Jones, is a nurse, divorced, childless, loves his son (played by Ronnie Howard), and is clearly the better choice?  Maybe he will figure it out by the end of the film?

It's clear she's a better choice for a mom for little Ronnie at his birthday party, where Shirley is there to help wrangle the kids, but the socialite isn't.  Glenn Ford has his hands full, with kids running around like maniacs.  It's actually a pretty accurate picture of a kids birthday party.

There's a quick scene where a little girl starts running up to people with a toy automatic rifle, shooting at people. A little girl seems unfazed, even though it's LOUD.  But Glenn Ford yells at her, appropriately.  "Jane, you never point a gun at anybody, ever!"   He seemed really started for a moment.  I would have been, too.  But this is New York, in 1963.  Guns were probably highly regulated.

I love this movie.  I feel for Glenn Ford - he clearly likes Shirley, but the socialite maybe is more fun and sophisticated?  And very different than his deceased wife.  So his dilemma is real.  But then again, this might be a more interesting film if the WOMEN got to decide, and not the man.

The appearance of the toy rifle is a little jarring.  It's interesting how loud it is.  And that it has the little red tip at the front to show that it's harmless.  Just a toy.  How many kids in the 1960s had toy guns like that?  How many still do today?