This stand-off in Oregon, with an armed group of ranchers and so-called "militia" members occupying a federal bird sanctuary in protest of federal land management, is making me think about the portrayal of cowboys, ranchers, homesteaders, and the federal government in classic Hollywood film. While individual cowboys have always been glamorized, ranchers have not. In fact, ranchers have often been portrayed as villains, standing in the way of progress.

Two films immediately come to mind. 1940's The Westerner, starring Gary Cooper and Walter Brennan; and Shane from 1953, starring Alan Ladd, Van Heflin, Jack Palance, and Jean Arthur.  Both of these films feature homesteaders in conflict with ranchers.  The homesteaders are portrayed as stubborn underdogs, fighting for a just cause, and the ranchers as violent, even cruel, bullies.

In The Westerner Cooper is a drifter who is accused of horse thievery and sentenced to hang by a cruel Judge Roy Bean (Brennan); Cooper talks his way out of the hanging, but discovers that Bean has taken sides with ranchers against new homesteaders in a turf war.  Bean routinely looks the other way when ranchers threaten and harm the homesteaders, including setting fires to crops.  Cooper eventually takes up with the farmers; he gets deputized, and files a warrant for Bean's arrest, but when Bean doesn't surrender he's forced to kill him in a shoot-out.  Cooper and Brennan have an interesting relationship in this film, as both friends and enemies; Cooper tries repeatedly to get Brennan to see why he's being unfair to the farmers, but to no avail.  Bean sees the farmers as dirty trespassers.  It's also important to see that Brennan was a Rebel soldier in the Civil War, proudly wearing his uniform in the closing scenes when he thinks he's about to meet the famous actress Lilly Langtree.

Shane follows a similar plot but with a much more meaningful theme.  Ladd is a farmhand good with a gun, and with a mysterious past.  He gets a job on a new homestead, but all of the farmers are threatened by a rancher named Ryker who is trying to scare away the farmers so he can grab their land.  The farmers are often physically intimidated in town.  One farmer resists, and gets shot dead by a crazy gunslinger played beautifully by Jack Palance.  This murder frightens the farmers, but Shane's boss, Joe Starrett (played by Van Heflin) vows to confront Ryker.  Starrett's wife, played by Jean Arthur, is opposed to violence and guns, and wishes there were none in the valley.  She's oddly attracted to Shane, despite his secret history, which seems to include gun violence.  Shane, afraid for Starrett's life, knocks him out and confronts Ryker in his place.  In a shoot-out Shane manages to kill Ryker and all of his men (famously with the help of Starrett's son) but not before getting wounded, maybe mortally.  Shane leaves on his horse, blood dripping from his arm, as the boy yells for him to come back.  He tells the boy to tell his mother that there are no guns left in the valley.

The common theme is that the ranchers feel they got to the land "first."  Of course this isn't true, as the ranchers are usually trespassing on Native American territory.  But this sense of ownership, or having a "right" to the land, is what motivates them.  They feel no one else is using it.  Not the native tribes, not the government.  But they never really own the land, despite their claims to it.  They might have the right to graze on certain acres, or even share the land, but they don't own a deed.  That is reserved to the government, which claimed all new land acquired through treaty or war or purchase.

As the West got settled, the federal government would grant land to railroads and developers, often for free or cheap.  There was much graft and corruption regarding who got land, and how.  But much of the land was deemed to be just open territory, and this is the territory many ranchers used to graze.  As the borders of the West got closed, and states took the place of territories, there was debate over who owned that open space - states or the federal government.  The courts ruled that unless otherwise stated, that open land belonged to the federal government.  Case closed.  And in the early 20th century, much of that land was turned into federal parks.  We have Teddy Roosevelt to thank for that.

Shane and The Westerner were both made forty, fifty years after the issue of open land was settled.  It's understandable, then, that the homesteaders in these films are the heroes.  Awarded land from the federal government, through the Homestead Act and other laws, they have rights on paper that the ranchers only have by right of possession.   They have legal right to the land.  And through the violent actions of the ranchers, who try to bully the farmers away, then burn down their farms (in The Westerner), then resort to murder of homesteaders (in Shane), the ranchers give up their moral rights.  They try to use force - might - to take the land that by law belongs to someone else.  That's called theft, and the ranchers end up being the villains.

These man in Oregon that have forcibly occupied federal land seem to be under the sway of paranoid, conspiracy driven opportunists.  They see the federal government as an abusive tyrant, taking away rights of hardworking people trying to just make a living.  But reading between the lines, and looking at the actual history of the actual men at the center of the conflict, it seems to be much simpler than a broad government conspiracy about rights.  Ammon Bundy, son of the infamous rancher Cliven Bundy, wants the federal government to give land back to the states, under the assumption that he and ranchers like him will then get unfettered access to the land.  The Bundys think that they have rights to the land by virtue of possession, and those rights mean they don't need permission to graze, and they certainly don't need to pay to graze. They are using this unguarded bird sanctuary in Oregon as a test to see if the federal government will push back.

Just as in the past, the ranchers are using force and intimidation.  They are heavily armed.  What's different, so far, is they have no actual people, no homesteaders or Native tribes, to scare off.  Just bird watchers who are conveniently away, this being the middle of winter.

If you're unfamiliar with either The Westerner or Shane, see if you can find and watch them.  You'll get a good idea of how and why ranchers feel entitled to land that they don't legally possess, and you'll see a startling connection in the attitudes of villains like Brennan's Roy Bean, and Jack Palance's evil gunslinger, to the gun toting bullies in Oregon.

Posted by Jason Betke at 1:14 PM No comments:

Interesting images from the sidewalk at State and Roosevelt. 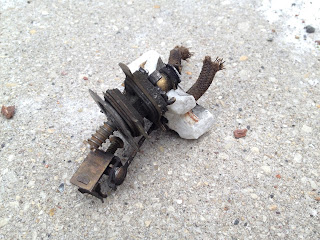 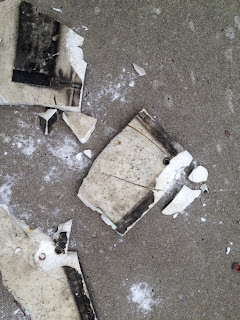 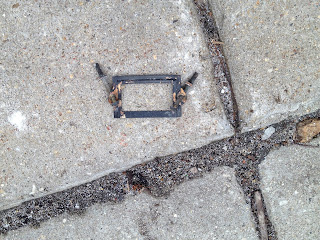 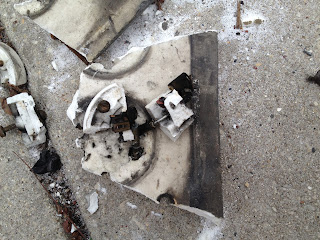 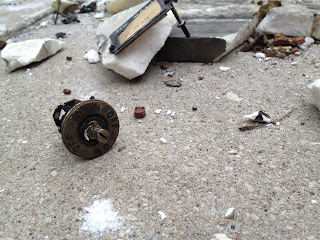 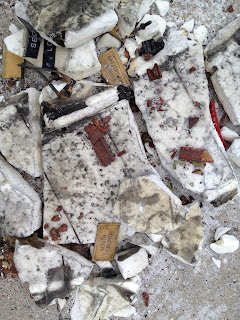 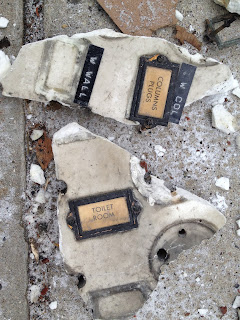 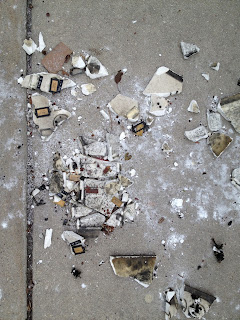 Posted by Jason Betke at 7:49 PM No comments: