Last night I tuned into "The Road" (2009), the film about a father and son in a post-apocalyptic world directed by John Hillcoat, for about a half hour.  I watched the scenes where the father digs an old Coke can from a machine for his young son, where the father and son sleep in a truck on an empty highway (and we get a flashback showing us how the mom dies), and the horrifying segment where they discover a houseful of cannibals and their starved victims.
These scenes filled me with a queasy sense of dread, similar to what I remember feeling in the 1983 television movie "The Day After."  I think creating an emotional response is the primary goal of a filmmaker.  An audience needs to laugh with a comedy, cry at a melodrama, or feel excitement or fear in a thriller   But creeping, nauseating dread is an uncomfortable reaction that, as an audience member, I don't want to feel.  It reminds me a little of the way many people felt watching Todd Solondz's 1998 film "Happiness."  I found that film darkly funny, but I know others were just slowly sickened by it.
Now that I'm a parent I have trouble watching "children in peril" films.  I do not like watching children frightened.  It is not a pleasant emotion.  And if for some reason the child actually dies in the film, I turn it off.  I'm not a fan of one character suffering for plot purposes, or the need to sacrifice one character for the benefit of another.  Narratives about one character overcoming their own sense of loss are usually told at the expense of the victim.  I often wonder if the deceased's story might have been more interesting.
I understand why we make and watch these films like "The Road" and even "Children of Men" (2006).    We have a curiosity about what might happen if things go wrong, and we want to warn the world away from self-destruction.  But sometimes I can't reconcile the story with the sick emotions I feel in the audience.  Maybe I could in the past, but not now that I have my own family.  In "The Road," when the father found an abandoned fallout shelter filled with food, and he and his son had a moment of peace and happiness, I turned it off.  I needed a happy place to keep me from getting nightmares about an uncertain and horrifying future.
Posted by Jason Betke at 11:02 AM No comments:

I caught two films on cable this week - "It's Complicated" and "Stranger Than Fiction."  I missed both when they were in the theaters.
"It's Complicated" (2009) reminded me of 1940s screwball comedies that had couples divorcing and then remarrying, the kind that used to star Claudette Colbert or Fred MacMurray.  Not a serious film but it had some nice moments.  How could it not with Alec Baldwin, Steve Martin, and Meryl Streep.  Definitely worth seeing.   Interestingly it was directed by Nancy Meyers who has made a career out of attempting to bring back 1940s - 1960s filmmaking, with remakes of "Father of the Bride" and "The Parent Trap" under her belt, and the screwball "Private Benjamin" and other films part of her writing career.

And today I caught up on "Stranger Than Fiction," the Marc Forster directed film about an IRS agent (Will Ferrell) who discovers he's the main character of a novel being written by famous novelist Emma Thompson.  Ferrells character really comes out of his shell when he meets coffee shop owner Maggie Gylenhall, and there is this sweet scene where he plays a song for her on a guitar, and she completely falls in love with him.  A very touching moment.
Posted by Jason Betke at 7:13 PM No comments:

Can't wait for this to open in Chicago:

French film director Claire Denis has a new film opening this weekend at the Music Box theater in Chicago.

Here is her biography on imdb:

And a description of the film 35 Shots of Rum from the Music Box website:

Posted by Jason Betke at 8:36 AM No comments: 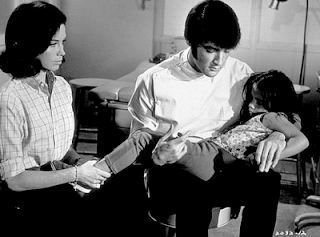 In 31 films he played a "singer" 9 times, a race car driver 3 times, and a "half-breed" indian twice. In more than a few films he played a returning soldier turned singer, gambler etc. This list starts with his last role and ends with his first, in chronological order.

Compiled by Jason
Posted by Jason Betke at 11:17 AM No comments: