An Examination of Mrs. Goethe, a German Housekeeper, in 1963's "The Thrill of it All"

I'm accustomed to seeing Germans portrayed as mad scientists, cold-hearted businessmen, and of course Nazis.  But I was surprised by a different kind of role for a German in 1963's "The Thrill of it All," starring James Garner as Dr. Gerald Boyer and Doris Day as his wife Beverly.  The film was directed by Norman Jewison and written by Carl Reiner, with a story by Carl Reiner and Larry Gelbart.

Doris Day plays a housewife married to a successful doctor, James Garner.  Doris gets discovered by a soap manufacturer and she becomes the company's spokesperson, doing live commercials for a television show.  (The TV show features Carl Reiner in a variety of interesting roles, including a cowboy and a Nazi.)  Garner becomes jealous of his wife's success and is upset that she's away from home working so much.  In his opinion her work isn't as valuable as his work delivering children as an obstetrician.  He spends the last part of the film trying to make Doris jealous by pretending to have an affair.  She ultimately gives in to his demands and quits the very lucrative spokesperson job, preferring instead to be the wife of a doctor. 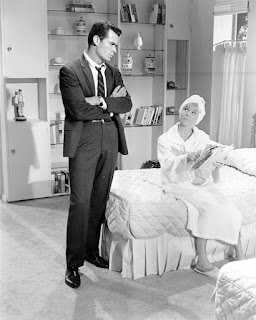 They are a well-to-do couple, with two children and a large house.  At the beginning of the film they have a maid, an older American woman, who seems perfectly good at taking care of the kids.  But there's a scene, after Day has begun her new job, where Garner accidentally enters the maid's room at night.  She reads this as an advance and is so appalled she quits.  It's all a stretch and not very funny.

Day hires a new maid, Mrs. Goethe, played by Lucy Landau, and for some reason she is German immigrant who speaks poor English and is befuddled by Day's and Garner's family life.  She's portly and bit homely, and she's unable to answer the phone correctly.  Garner calls to talk to Day, but when he introduces himself on the phone, the maid answers with "Dr. Boyer nicht home, he hospital."    She speaks to everyone with this mix of rudimentary German and pidgin English.    Later in the film she's unable to explain to the doctor that his wife is upstairs filming a commercial, and he walks in on the shoot, becoming angry that they are working in their bedroom (and disrupting his attempts at being amorous).  A few other times in the film she is the first to discover the chaos affecting the family, but her poor English leaves her unable to explain the situation to anyone correctly.  Instead she's left to mutter "ach du lieber" exasperatedly.

I think this is very similar to the treatment other ethnic groups have received on film and in other media.  Japanese gardeners and houseboys in the 1930s, black maids from the 1930s to the 1950s, Chinese laundry men, Hispanic maids, black train porters - they all have been subtly and overtly degraded over time.  Germans have had a different experience, presented primarily as hard working immigrants, at first, but then almost uniformly as fascist enemies of America.  This portrait of Mrs. Goethe as a befuddled maid stands out as a strange anomaly.

The choice of the maid's name, Mrs. Goethe, is also odd.  Goethe is one of Germany's great poets.  Why name a woman who can't speak any more than pidgin English and rudimentary German after such a great, well respected poet?

"The Thrill of it All" came just 18 years after the end of World War Two, and I wonder how many Americans saw Mrs. Goethe as some kind of comeuppance for Germans.  It's a strange portrayal that provides some insight of what other ethnic groups on film have to deal with, even to this day.
Posted by Jason Betke at 10:03 PM